Free Shipping on All Orders Over $25! *Ground Shipping, Lower 48 States

"Jace's Journey": A Book Written About How E-Collar Saved Her Dog

Customer Daenna Van Mulligen wrote a book about rehabilitating her highly fearful dog Jace @showmethexolo and also publicly speaks about training him with the ECT e-collar. She initially purchased the EZ900 (written about in month 34, page 53, of the book) and later upgraded to the Pro.  Her story is POWERFUL!!! 💛✨

"Jace is a rare primitive breed Xoloitzcuintli rescued from a back-yard-breeder in La Paz Mexico at 7-8 months old. He was severely under exposed, having never left the compound where he was born.

Along with Xolo's natural skittishness that lack of socialization resulted in a dog with debilitating fears. When he arrived in Vancouver, Canada, he was 10-11 months old. The first trainer (I’ve worked with five in total) we brought in the first month he arrived simply said, “He’s terrified.”

Jace got worse when we moved homes; it got so bad he wouldn’t step foot off our front steps. We had to carry a 60lb dog out just to pee. If another dog appeared when he was outside he would react dramatically—it was scary.

Our vet behaviourist prescribed a cocktail of medications—12 pills per day! Around the same time, the trainer I was working with told me there was nothing more she could do for us. He was beyond her scope.

It was then we hit rock bottom and I knew I had to find another way. I started researching and speaking to other Xoloitzcuintli owners and discovered the e-collar. I was terrified it would make my fearful dog worse, but in reality, he couldn’t get worse. I would cry every time I had to take him outside—it was so stressful for both of us.

So after loads of reading and watching training videos, I began using an E-collar Technologies e-collar with direction from a balanced trainer in the USA virtually.

Using an e-collar has been life-changing—without hyperbole. When I saw the meds weren’t helping, but e-collar training was, I began weaning him off meds one-by-one under vet guidance. Yet he continued to improve and grow more confident!

Jace walked around our block for the first time two years and a half-after moving in, he now goes for runs with me on the seawall, he rarely reacts to other dogs anymore because his confidence has grown dramatically.

Jace will always be a foundational fearful dog, but I can’t imagine life now without the e-collar. We have a second Xolo now—a confident and sassy female and she benefits from the e-collar too. Even as well trained as she is, living in the city, I would never let my dogs off-leash without the certainty of the e-collar.

No matter what anyone says, I know how beneficial e-collars are when properly used. So much so I wrote a book about our story." 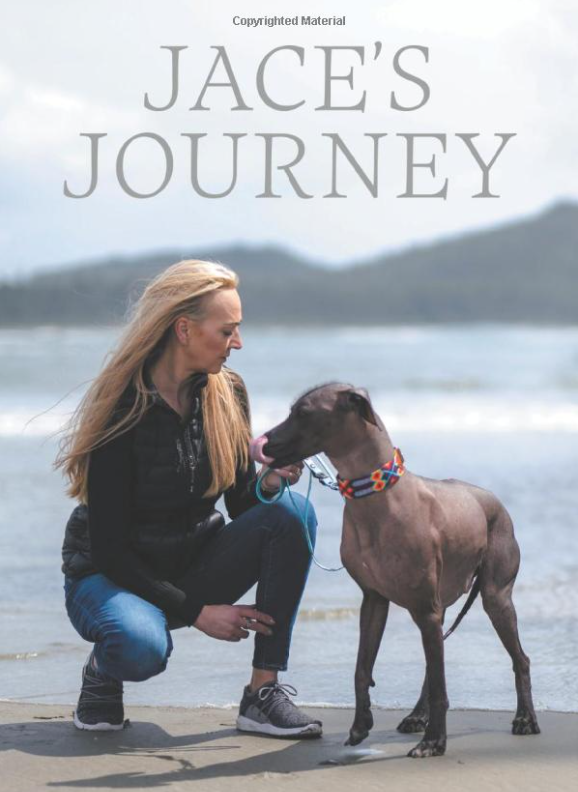 Published in August 2022, it’s called Jace’s Journey and is available through booksellers worldwide, including Amazon. Book description from Amazon below.

"There's nothing more I can do for you."
We had officially hit rock bottom, my dog and me.

A moving story about a woman and her dog, Jace's Journey is a testament to those dog owners who, try as they might, struggle with their dogs' anxieties, triggers, and traumas. Van Mulligen takes you on a journey through time, trust, consistency, and acceptance-from tears to triumph.

The journey begins when Van Mulligen and her husband choose to foster Jace, a rescue pup and their first-ever dog. Beautiful and charming, Jace is a Xoloitzcuintli from Mexico who, despite his sweet character and calm demeanour, is troubled and anxiety-ridden. The busy streets, loud noises, and passersby of Vancouver, B.C. have a terrible impact on him, unleashing behavioral issues and unshakeable fears. Out of her depth, Van Mulligen seeks help from professionals everywhere.

Van Mulligen journals the struggles and successes of Jace's training, development, and rehabilitation. Far from easy, she details the challenging process, including what tools and resources proved fruitful and which tricks and tips gave them hope. Chock-full of good advice and relatable experiences, this book is a light in the dark for dog owners and lovers.